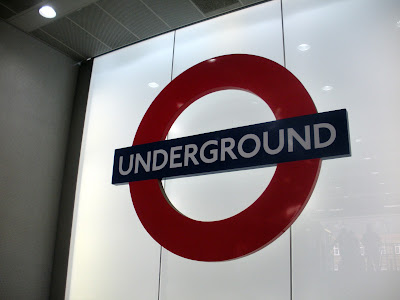 Cheerio, mates! As those of you on Twitter may remember, I've just returned from a wonderful, whirlwind weekend spent visiting my sister (affectionately, Middle Chip) in London, where she's studying for the semester. We had such a fabulous time, and I was so sad to leave her again until December! But it's definitely a weekend I'll always remember sharing with her. :)

Now, the two of us didn't get up to all that much cooking this weekend (although we did manage one kitchen creation!), but what follows is a bit of a tour through our antics and escapades...most of which involve a lot of sugar...

I landed bright and early on Friday morning--a full hour earlier than expected, actually, since our plane apparently caught some ridiculous tailwind. After making my way to my sister's flat, the two of us popped into a cafe to refuel (me) and wake up (her) over some toast and tea (...and a chocolate croissant). We did some exploring until her class at 2, visiting the Princess Diana Memorial Fountain and the Peter Pan statues in Kensington Gardens, as well as the Prince Albert Memorial. Then I was left to my own devices as Middle Chip went to go learn about the ins and outs of marketing in the UK. 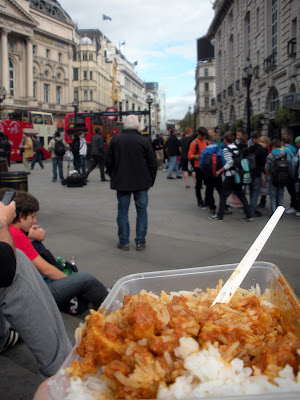 I took the Tube down to Trafalgar Square, where I spent some time people watching and noshing on chicken tikka masala (if I'm not mistaken, the UK is like the #1 place to get Indian food outside of India itself. And I'd believe it--there's plenty of options, sit-down or take away!) before wandering down to Covent Garden. I had a blast there, sampling teas in tiny shops, watching a dancing string quartet, and even doing some overseas cupcake research. 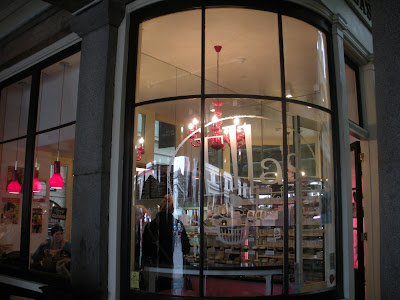 Welcome to Ella's Bakehouse, Covent Garden. I was drawn into this tiny storefront by the sheer amount of pink and glitter that I could see through their front-facing windows (admittedly not something I'm normally attracted by, but I suppose this was an anomaly). And the cupcakes! They had their traditional bestsellers--Oreo Cookies and Cream, Red Velvet, Raspberry Lemon. But then I asked for the local favorite. The shopkeeper's answer? 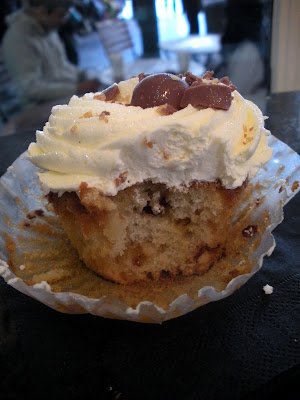 Now, I had never heard of Maltesers--which I think are basically the UK version of Whoppers, or malted milk balls--before I started reading so many baking blogs. But how could I say no to a cupcake that was not only a British fave, but also drenched in edible glitter?! Not possible.

The cupcake itself was a vanilla sponge cake with crushed Maltesers throughout. It was a pleasantly dense cake--not overmoist and crumbly like some couture cupcakes I've sampled. Almost more of a poundcake consistency, if that makes sense, which stood up well to the silky sweet vanilla buttercream on top. The whole Malteser was also a treat when the time came for that bite! 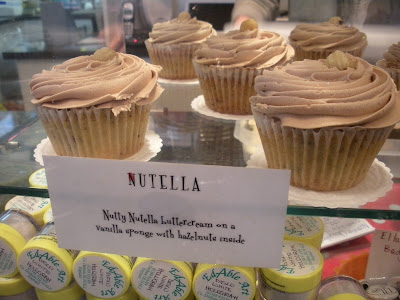 I would have loved to sample the other European favorite, the Nutella (apparently the French tourists go crazy for this particular variety), but I guess the hazelnut-dotted vanilla sponge with Nutella buttercream will have to wait for my next trip overseas. :)

The rest of my wandering took me to the National Gallery and past Number 10 Downing Street and the Houses of Parliament, before returning to my sister's flat to meet for a late dinner (four-hour classes are no joke!). Of course we had a plan... 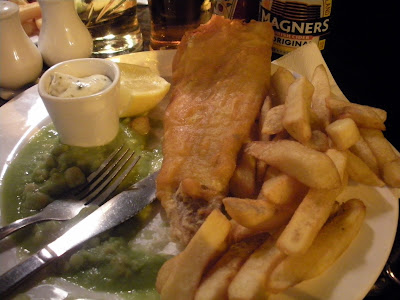 I know, I know, could we be more cliche? But I'm not kidding when I tell you they were finger-lickin' good. If you ever get a chance to patronize the Stanhope Arms, order the fish and chips with a side of mushy peas (...well, maybe that's a taste thing, but I love them) and an ice-cold Magners (Middle Chip voices her love for Strongbow here). I will admit it here: I will take a pint of cider over a pint of ale, beer, or whatever other hoppy thing you offer me, any day. Yes, it's basically hard apple juice. I own it.

Middle Chip and I returned to her flat with our sweet teeth nagging us...and she had a dessert epiphany. 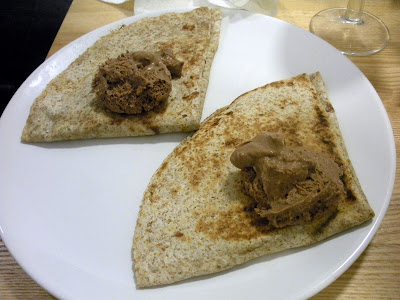 1. Heat a small skillet over a medium flame.
2. Spray skillet with nonstick cooking spray and press tortilla down. Wait 10 seconds, then flip.
3. When bubbles start to form on the tortilla, spoon Nutella into one side, spreading as best you can. Fold the tortilla over to cover.
4. If desired, repeat Nutella-ing process on one side of the folded tortilla and fold over again.
5. Flip folded tortilla-crepe to brown the other side.
6. Remove and garnish with your desired topping.
7. Eat and enjoy!

Free admission: these are not your delicate French crepes. But if you are a) a poor college student (like Middle Chip) or b) a broke entry-level employee (like me), these will do just fine! Our only complaint was that, since the tortillas are typically used for quesadillas and the like, they're a bit thicker than your traditional crepe wrapper would be, making for a somewhat chewier dessert experience. Our solution of choice, however--more Nutella--countered this imbalance just fine.

Our next day in London took us all over town as well. We visited two open-air markets--Portobello Market and Borough Market--and also took a jaunt over to King's Cross Station (now renowned for its prominence in the Harry Potter books, of course). I absolutely fell in love with Borough Market--a foodie's paradise! It was filled with booths staffed by local growers and artisan producers showing off their wares. I sampled tons of unique olive oils, jams, cheeses, chutneys, teas, even granola. 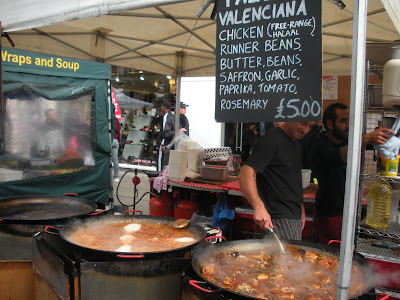 Middle Chip and I also saw a show off-West End that night, at the Almeida Theatre in Islington. If you're in London or if My City comes to the U.S., we both thorougly enjoyed it!

Sunday was definitely dedicated to sweets and confections. After a perfunctory breakfast, we headed to Hummingbird Bakery to sample the cupcakes I've heard so much about--all of my college friends who studied abroad in London raved about them. Middle Chip chose her go-to, Red Velvet frosted with cream cheese, while I selected the Black Bottom--chocolate cake with cheesecake and chocolate chips baked in, topped with cream cheese frosting. 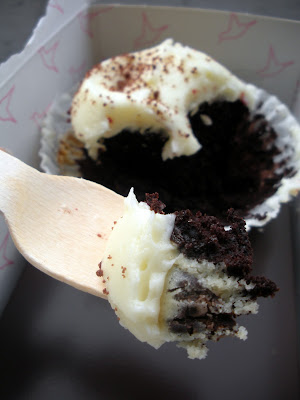 Oh yes, it was as good as it looked. The chocolate cake was dark and dense, which balanced out the sweet tang of the cream cheese really nicely. And the chocolate chip / cheesecake bits provided awesome textural contrast--I was in cupcake heaven! Hummingbird also offers daily special cupcakes, and I wish we had been there on a Tuesday...I'm dying to know what a Popcorn Cupcake tastes like.

Our next stop that morning was Harrods, shopping mecca for any female with a charge card. After exploring the housewares and jewelry sections of the labyrinth ("Ohhh, dahling, look! This chaise longue is on sale for only £1,200!"), we happened upon the Harrods ice cream parlor. As I'm wont to say with any sort of confection (I mean, we had cupcakes at 10:30 in the morning for crying out loud), much as is the case with alcohol, it's 5 o'clock somewhere. Time for an ice cream break! 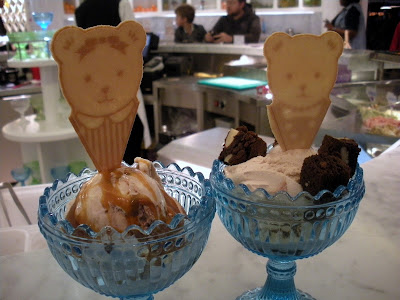 Both Middle Chip and I opted for Nutella sundaes, hers with brownie bits and mine with caramel sauce. The cute little bear wafer toppers made for an even more adorable photo op!

The final [food] highlight of Harrods came when we popped into Laduree, a Parisian cafe known (at least among my London-traveling friends) for its macarons. My salted caramel macaron was just the perfect amount of crispy and chewy--definitely a thumbs up! (Middle Chip voiced equal full-mouthed approval of her chocolate macaron). 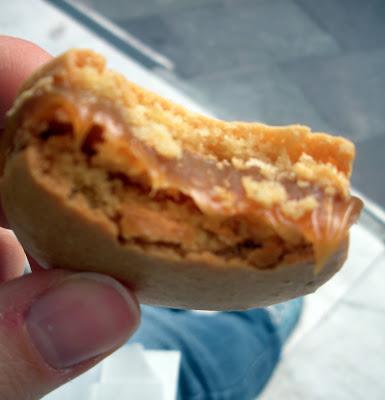 Sadly, I had to take my leave from my dear sister early this morning. She has exams to take and an internship to start, and I have to be rudely slapped back into reality when I return to my big-girl job tomorrow. And while she's taking weekend trips to Florence, Brussels, Munich, Paris, and Barcelona...I'll be here wishing I were with her! Hopefully you can all tell by this food-filled (and REALLY LONG) update how much fun we had together...miss you, sissy!
Posted by Tara at 6:29 PM

Tara
I'm a New York girl who loves books, loves to bake, and is trying to figure out where she fits in this very large world. Life is uncertain, but chocolate will never let you down. 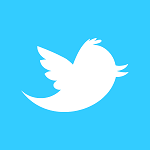